The House That Ruth Built (in Lego)

I found another Lego artist on the information superhighway. This dude is the first of only six Lego Certified Professionals in the world. He is building a Lego Yankee Stadium in honor of the 85 year stadium's closing. It contains over 45,000 Lego elements. He built it with a Manhattan gradeschooler. Even if you hate the Yankees, you have to appreciate this homage to a piece of New York history.
Posted by groovesocket at 9/26/2008 11:23:00 PM No comments:

Check out this Rocketboom daily internet culture video on beards: http://www.youtube.com/watch?v=L5oaT5VTgTU. It's very informative. Some of the footage is from the 2007 World Beard and Moustache Championships in England. There's no debate. Beards rock.
Posted by groovesocket at 9/26/2008 11:13:00 PM No comments: 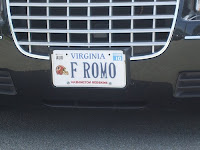 It's about time I blogged about football. The season got underway three weeks ago, and this is my first post. My Redskins are off to a 2-1 start under rookie head coach Jim Zorn. They didn't look so good the first game of the season on the road against division foes and defending Superbowl champs the Giants, but looked like a playoff team in home wins against the Saints and Cardinals. They face the Cowgirls this Sunday in their last regular season game in the rust bucket Texas Stadium. The Cowgirls are arguably the best team in the league, but like the saying goes "On any given Sunday." The pic says it all. I had a VA Redskins license plate on the Z [RIP]. Gots to show my love to my team everywhere I go. The Redskins are in the toughest division in the league. The NFC East is a combined 10-2 after 3 weeks.

My season ticket upper bowl pair were upgraded this season, so we are not in the nosebleeds anymore. Chronic appreciates that. I love going to the games. I redeemed some of my Redskins credit card points for a new Redskins waterproof windbreaker and a polo shirt I can wear to work. I also redeemed points for a 19" LCD HDTV. It's great getting this stuff for "free". I was shooting for a free pair of Superbowl tickets, but they are 300,000 points. I'll be dead before I could earn enough points.

I'm fantasy football league commissioner for the 7th straight year. We changed fantasy websites from Yahoo to Flea Flicker this season. We've retained the league name "All Killer No Filler" for consistency sake. Flea Flicker is a free keeper league, neither of which Yahoo offers. The core group of players are back. We have one new player this year, another female, putting the league chick count at 3. Lots of girl-on-girl action. My team, "Reefer Sutherland" is 3-0, ranked 1st in the division and 2nd in league. I was the #1 seed and scored the most points going into last years playoffs (thank you Tom Brady), but lost both playoff games and ended up 4th overall. After 5 years of mediocre seasons, it's nice to be one of the dominant teams.

Bad Times Can Be Good For Your Health

I read an article about how unstable times can be good for health. I find that point of view intriguing. There is scientific evidence to prove it. Sure, unstable times breed worry and stress, but statistics show that as the economy worsens, traffic accidents decrease, as do industrial accidents, obesity, alcohol consumption and smoking. Deaths go down when unemployment goes up. People just can't afford to maintain the same lifestyle they had when they were more prosperous. An empty wallet means less cash for booze and cigarettes, so you'll behave better. It can serve you well. Risky activities, such as driving, increase in good economic times. There are more jobs so a greater potential for accidents and more money to maintain bad habits. I'm not saying recessions are good. For those suffering during poor economic times mental health worsens. But even as people are stressing out, they're smoking, drinking and driving less. Read the full story.
Posted by groovesocket at 9/10/2008 05:04:00 PM No comments: Lego Taj Mahal
Originally uploaded by chronic-shock
I went to the local Lego show, BrickFair, over Labor Day weekend while Chronic was out of town. The three day affair is mainly for Adult Fans of Lego (AFOLs) but parts of Saturday and Sunday are open to the public. There was a huge turn out. Mostly kids with their parents. The AFOLs bring their MOCs (My Own Creations) to display. I'm still a rookie AFOL, so I didn't have any MOCs. Most AFOLs are on par with Trekkies and Star Wars nerds. They take it seriously. Some spend all their money on LEGO parts. Their houses are full of the bricks. I'd like to meet an AFOL who lives in a house made of LEGO. Check out all the pics from the show. BrickFair even got some press. There was a write up in the Post.
Posted by groovesocket at 9/05/2008 04:50:00 PM No comments: