I've had an affinity for black rock ever since I saw the "Cult of Personality" video on MTV. I was riveted. I found it fascinating that four black dudes could rock as hard as any white band. To me, a black rock band was groundbreaking. Before Living Colour, I thought black guys just rapped and sang R&B. That day I began a quest - to seek out all the black rock bands. I became fans of Living Colour, Lenny Kravitz, Fishbone and DC's own Bad Brains. I grew up in Atlanta which had their very own black rock band, Follow For Now. They put out one eponymously named album. I went to a ton of their concerts.

Living Colour were the groundbreakers - they co-founded the Black Rock Coalition. Check out the BRC's website for a list of bands, concerts, compilations and music. Rock bands with black members are more common these days thanks to the early trailblazers. Spin magazine recently published an article Black Rock: An Oral History. It's the history as told by those who lived it. If I've intrigued you, read the article then listen to some black rock. 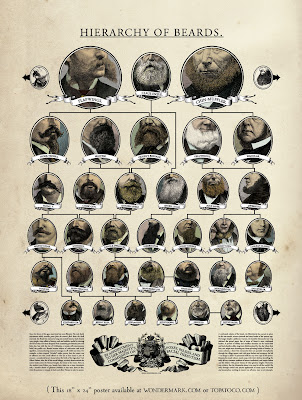 Wondermark's latest print, the "Hierarchy of Beards," depicts the evolutionary history of our facially hirsute brethren. You can buy the print here. View the full size image.
Posted by groovesocket at 12/19/2008 08:34:00 PM No comments:

Meet Beard Team USA. Click on the pics for details. I've got a detail page of my own. It links to this blog. Thanks to Phil Olsen, self-appointed captain of BTUSA, for putting the team page together.
Posted by groovesocket at 12/05/2008 07:38:00 PM No comments: