Back in July we posted the Beard Index, which is a poster of beard types. A couple of weeks ago, someone posted a comment to that post, which was a link to an expanded beard index. Check it out. It was created by a fellow beard enthusiast, John Dyer. Check out his comprehensive Beard Pages. It contains a FAQ, grooming tips and his quest to demonstrate every beard type on the index by shaving himself. During my pogonology session I stumpled upon another beard blog, the Beard Revue. Enjoy. In contributor news, we have our first Hairy Bastard, my good friend Euro Rob. He's a good man.
Posted by groovesocket at 11/12/2008 06:38:00 PM No comments:

Back in October I blogged about my quest to obtain Super Bowl tickets. I entered the NFL Super Bowl ticket random drawing back in May. I just got my response in the form of a blue postcard.

Your name was part of the Super Bowl XLIII random drawing that included all written requests received by this office between February 1 and June 1. The National Football League requests to notify you that your entry was not selected. All Super Bowl tickets available from the NFL for public sale have been allocated.

We appreciate your continued interest in Super Bowl games and the NFL.

Well that's that. But not all hope is lost. The NFL is vowing to cut out ticket middlemen, a.k.a. "scalpers". The league is studying possible methods to attempt to get its lowest-priced Super Bowl tickets directly to fans and not under the control of ticket brokers. "The reality is that Super Bowl tickets are trading at four to five times face value," NFL commissioner Roger Goodell said. The league is taking it a step further. The NFL is reducing playoff ticket prices by about 10 percent. The league is making the move in response to the national economic crisis. The league also, for the first time, has authorized lower ticket prices for games in the first round of the playoffs than for games in the conference semifinals the following weekend. Tickets usually have been priced the same for those initial two rounds of the playoffs. "We want to be responsive to the economic challenges facing our fans," an NFL spokesman told the Associated Press.

I'm indifferent about this. I love watching football. I love going to games. Football gives me a respite from a hectic week. It gives me solace. During the spring and summer I yearn for it. But while I appreciate the NFL reducing the price of playoff and Super Bowl tickets, the league is pricing out the middle class. No family of four can afford to go to a football game. The price of tickets is ridiculous. But so is the price of movie tickets, automobiles, real estate, food...the list goes on and on.
Posted by groovesocket at 11/10/2008 06:20:00 PM No comments:

Article here. A good mix of modern and classic rock. A little overloaded with Beatles albums though. I would have liked to have seen a bigger variety of artists. Nonetheless, another great use of LEGO. The pic is Pink Floyd's "The Division Bell".
Posted by groovesocket at 11/09/2008 04:09:00 PM No comments: 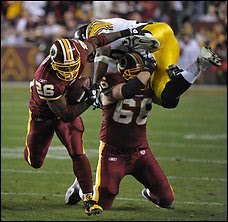 The Redskins played the Steelers on Monday Night Football. The game was significant for two reasons - 1. A Redskins loss means that Barack Obama wins the election and 2. for the first time in team history, the Redskins wore a burgundy monochrome uniform. Burgundy jersey with burgundy pants. They looked awesome. That was the best part of the game for me. They got their asses handed to them on national tv, but they looked great doing it. The uniform feedback on the internet was decidely negative, but from the articles I read, the team liked it and the burgundy monochrome uniform could show up again. I hope so. I'm obsessed with football aesthetics, especially when it comes to my favorite team. The Redskins 2007 Lombardi era throwbacks with the Packers style helmet left a lot to be desired. Some NFL teams have a third alternate jersey. The Redskins do not. I imagine a killer looking yellow gold jersey with burgundy numbers. They would be the only team in the league with a yellow gold jersey. Or bring back the yellow gold pants, like they wore in the '70s. Danny, you are a master of marketing. Please create the gold alternate jerseys. I'll definitely buy one.
Posted by groovesocket at 11/04/2008 06:28:00 PM No comments:

There is this amusing website called "Hot Chicks with Douchebags". The companion book hit bookshelves in July. the website caustically lampoons male clubgoers and the women with whom they are photographed. The rampant "douchebaggery" displayed on the website makes me feel good about myself. Three "hot chicks" whose pics are in the book filed a lawsuit in New Jersey. The lawsuit says they have been forced to undergo medical treatment and psychological therapy, and have suffered financial damages as a result of their inclusion in the book. Yeah, right. They claim that the "vulgar" title has unfairly tarred them as "females who date dubious men." We'll aren't they? My advise is stop dating douchebags. If you familiarize yourself with the website, you'll easily spot the douchebags in the crowd. From what I can tell, all "hot chicks" date douchebags. What I want to know is how all the pics of hot chicks with douchebags get snagged for the website? Shout out to the Gator, member of the Douchebag Hall of Fame.
Posted by groovesocket at 11/02/2008 08:26:00 PM No comments: