Rage Against the Machine, pt 3 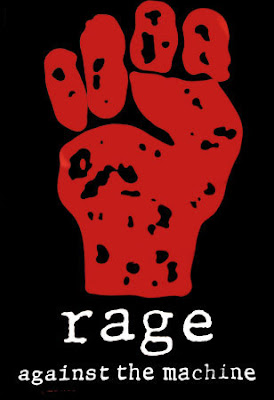 Part 3 of my love/hate relationship with technology series "Rage Against The Machine" is about the graphics card in the HTPC. Everything started out great. We had a computer controlling our home theater. We can watch blu-ray movies, TV, surf the information superhighway, watch TV on the internet, listen to our music collection and manage all our media-all with one box. The concept is brillant in it's simplicity. But computers are complex machines with minds of their own. About three weeks ago, the HTPC started making a loud buzzing sound. The sound was loud enough that it could be heard over the TV and music. I opened the case and found the sound coming from the graphics card fan. The HTPC has a 512MB NVIDIA GeForce 9600GS graphic card. That little fan was making a lot of noise. I did some internet searching and found a HP forum thread with users that have the same graphics card experiencing the same issue. The users in the thread concluded that the fan bearings are not lubricated and wear out which causes it to make noise. The DIY solution is to put some lube in the bearings. It quiets the fan. I tried it and the sound reduced considerably. But the bearings were already worn out, so I got HP tech support to replace the graphics card. The computer is still under warranty, so it didn't cost me a thing. Before installing the replacement graphics card, I lubed the fan. I figured I wouldn't give the bearings a chance to wear out. Hopefully being proactive will prevent having to replace the graphics card a third time. If the fan goes out again, and the computer is still under warranty, I'll get another replacement. It's free, so why not? If it's out of warranty, I'll buy a different graphics card and call it day. I hate having to spend more money to make this computer work, but it is what it is.
Posted by groovesocket at 3/25/2009 07:21:00 PM 2 comments:

Thanks Beardzzz for a great party!

Can you spot The General?

Visit msnbc.com for Breaking News, World News, and News about the Economy

Can You Hear Me Now?

Google rules the information superhighway. What started out as a no-frills search engine has blossomed into a dominate online software company. Their latest tool is Google Voice. Here's how it works:

With Google Voice, you get all your calls through a single number. Just add your other numbers to Google Voice and then make your own rules for how your phones ring. Click the Settings link on the right side of the page and click the Phones tab to change your phone settings and add the numbers you want to forward your calls to.

You can access and make calls from the phone and the Web, block annoying callers at will, and record custom greetings for different callers or groups of callers.

You'll also get more handy features that work across all your phones:

Google bought out GrandCentral over a year and a half ago. I've had a GC phone number for a couple of years now. After the buyout, nobody heard from GrandCentral again. Google wasn't promoting it. GrandCentral users thought that Google had abandoned GC and left it for dead in March 2008, when the GC blog went dark. But a year later, here comes Google Voice. After Google rebranded GrandCentral into Google Voice, the existing GC users were offered to convert to Google Voice and be the first beta testers, before it is offered to other Google users. So far, so good.
Posted by groovesocket at 3/21/2009 04:19:00 PM No comments:

The 2011 World Beard and Moustache Championships are being held in Copenhagen, Denmark. The date is to be determined. Denmark is home to The Lego Group, the company that makes the popular plastic interlocking toy bricks, and Legoland Denmark. Lego is also my favorite hobby. So combining my love of bearding, Lego bricks and traveling around Europe is a dream come true.
Posted by groovesocket at 3/21/2009 04:15:00 PM No comments:

The 2011 World Beard and Moustache Championships are being held in Copenhagen, Denmark. The date is to be determined. Denmark is home to The Lego Group, the company that makes the popular plastic interlocking toy bricks, and Legoland Denmark. Lego is also my favorite hobby. So combining my love of bearding, Lego bricks and traveling around Europe is a dream come true.
Posted by groovesocket at 3/21/2009 03:52:00 PM No comments:

The Iron Sheik @ the NYCBMC CIMG0280
Originally uploaded by chronic-shock
I just got back from the New York City Beard and Moustache Championships. I had a blast. It was a killer party. I've never gotten so much attention or had my picture taken so much in my whole life. There were at least three documentary teams filming everything. I was interviewed and even read a beard poem for one of them. It being NYC, there were tons of press-NBC and NY Times to name a few. That's me in the pic, #33. I stepped it up this time and went all out-I wore my authentic Middle Eastern outfit. The people in the crowd referred to me as "The Iron Sheik", an homage to the popular '80s WWF wrestler. I lost to the dude standing beside me in the picture, #32.

Phil Olsen, founder and self-appointed captain of BTUSA, was in attendance and was one of the judges. He sent an email to all the BTUSA members:

BTUSA member Beardzzz Saccoman and his very capable assistants (Cindy, Justin, and Sue) raised the bar last night for facial hair competitions in the USA as hundreds of screaming beardsmen and their fans sardined into the Public Assembly building in Brooklyn for hours of raccous [sic] fun and facial-hair camaraderie at the New York City Beard and Moustache Championships.

The big winner was BTUSA's Burke Kenny who walked away $500 less poor after the audience chose him as the people's favorite. Burke also took home first prize for full beard freestyle. Other winners were were Nate Stahura for the best recession beard, Kevin Byrne for the best patchy beard, and Ben Davidson in the moustache category, Leon Lutz in sideburns, Steve Cline in goatee, and Jack Passion in full beard natural. I am sorry, I do not have the name of the winner in the ladies' artificial category.

Be sure to watch, record or TIVO Live with Regis and Kelly tomorrow, March 16, for more on the competition [there was also coverage on The Today Show -Shock]. You just might see some people you know.

Once again -- thanks, Beardzzz, for a job well done!

I couldn't have described it better myself. Here are the few pics I took. I'll post more pics and video of the contest when they become available. Let me know if any of you come across any coverage of the NYCBMC. You can post the links in the comment section. Let it grow!
Posted by groovesocket at 3/16/2009 09:40:00 PM 3 comments: 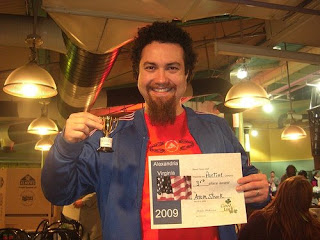 I participated in my first beard contest on Friday, the Alexandria, VA Beard and Moustache Contest. It was a local contest hosted by the local beard team lead by "The General". It's one of many "warm-up" events for the world contest. It was a small contest. There were only about a dozen contestants, including a couple kids in the "artificial" category. I entered the partial beard category, which had a total of three contestants. I ended up third of three. Hooray for me! That's me holding my third place certificate and trophy in the pic. The judges were two random women picked by The General. They had never judged a beard contest before. I was robbed. I should have been second. I clearly had a better beard than the rasta dude who came in second. Wyatt Earp came in first. He had the best goatee with styled moustache I've ever seen. It was no contest. 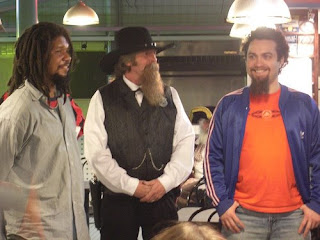 Here are pics of the event: Jennifer's pics and a set by another photographer.

On Saturday the local beard team marched in the Alexandria St. Patrick's Day parade. We were the novelty act. It was the first parade I've been in. Jennifer held the banner. Picks of us are on page 20, pics 350 and 351.


This Saturday me and The General are heading up to NYC for the NYC Beard & Moustache Championships. The NYCBMC is going to be a major event. Beardzzz, the host, was a participant in the Alexandria, VA contest. He drove down from CT.
Posted by groovesocket at 3/07/2009 08:27:00 PM No comments: