This one is from Dream Routine, another personal finance blog I follow. They are a part of the Money Crasher's 2010 Giveaway, which I blogged about. They have a $1000 valued bonus prize. Here is the link to enter http://bit.ly/7Wonsy.

LEGOLAND Florida scheduled to open in 2011

LEGOLAND Florida will be the second LEGOLAND park in North America. It will be located at the historical Cypress Gardens in Winter Haven Florida and will open at the end of 2011. LEGOLAND Florida will be the biggest LEGOLAND Park ever opened and will offer a unique mix of more than 50 rides, shows and attractions, including spectacular LEGO models and other interactive elements for the whole family to enjoy together. It will provide a full-day, year round, theme park experience geared towards families with children between the ages of two and 12. Its design will mirror the successful concept of the four existing LEGOLAND Parks in Denmark, Germany, UK and California. However, as with the other four, it will also have its own unique “twist” reflecting its stunning location and adding a Florida flavor.

all I can say is Merlin is a genius for buying the site and placing a LEGOLAND theme park that close to Disney World. Right in Disney’s backyard, but far enough away to avoid the fallout. Legoland California is set up almost the same in relationship to Disney Land.


Not only have the Redskins made significant changes to the front office with the firing of Vinny Cerrato and the hiring of Bruce Allen as GM before season end and to the coaching staff by hiring Mike Shanahan to be head coach, but the team is working to improve the game day experience at the stadium which was rated 28th out of 32 teams in 2007 by Sports Illustrated. The most significant upgrade is 'Punter-Proof' HD Video Boards Coming For the 2010 Season. The old Jumbotrons were so 20th century. They were in bad need of an upgrade.   There is a package of information and brochures that the Redskins are mailing out to season ticket holders this week. The "exciting season ticket membership enhancements" include

New Auto Seat Upgrade Technology: The Redskins implemented a major technology ticket system upgrade this past season including "Wireless Access Control" which helps fans get into FedEx Field faster than ever. Part of the technology platform also provides for a significantly streamlined seat upgrade process for season ticket holders. This system will ensure that more season ticket holders will automatically receive seat upgrades each and every year.

New Automated Parking and Traffic Management System: Designed to expedite travel time to and from the stadium.

College Football Games: FedEx Field is pleased to announce that it is hosting not one, but two major college football games in 2010: Virginia Tech vs. Boise State on October 2nd, and Penn State vs. Indiana on November 20th. You will have special priority, before tickets go on sale to the public, to secure some of the best seats for these games.

I'm curious how the new automated parking and traffic management system and the auto seat upgrade technology works. At least they are making an effort.

reBlog from my beard blog 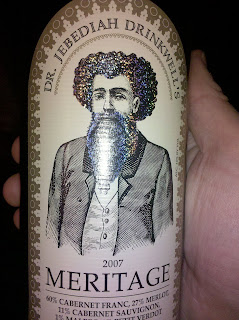 A friend of mine sent me this picture with the note "didn't know you  had done bearding modeling! ;)". I was young and needed the money. This sweet elixir made from fermented grapes is sold at Trader Joes. He replied "BTW - it was pretty good wine.  Good job maintaining "Brand Shock" as a premium brand." To which I replied "When Joe called and asked if he could market "brand Shock" elixirs in his supermarkets, I said my wine is drank by the same demographic as Cristal. He ordered 10000 cases immediately." My friend, who started his career in marketing, then replied "Thats the plan - D&D - Dismiss & Distinguish Dismiss the competition and Distinguish your brand as the top. That is Marketing 101 and that is Brand Shock!" If you're interested, here's the details of "Dr. Jebediah Drinkwell's Meritage".

The Whole Family Is Getting In On the Act

Our son's photographer, Photography By Marirosa, has a fun project this year. She's calling it the "Mustache Chronicles". She bought some ‘mustaches’ on a stick’ and all her 2010 clients will get to do a personal photo of themselves with one of them. She says "I want silliness, fun time and a bit of goofiness…at the end of 2010 I’m putting together a book about it!" I think the blonde mustache is a great contrast to my dark brown and red (and some grey) beard. My son looks good with a heavy 'stache. It suits him. I hope he grows up to be a great hirsute pogonologist.

Even Celebrities Are Getting Into the Act

From People.com (the wife sent it to me -Editor): From Goatees to Full Facial Hair: Are Beards the New Leading Man�Must-Have? – Style News - StyleWatch - People.com

Your Soul Patch Ain’t Got Soul

Before becoming a member of Beard Team USA, I wore a soul patch exclusively. It was facial calling card. Here's a repost of The Beard Coach's research into why it's called a 'soul patch'. I'm going with his recommendation and going to call it a 'jazz patch' from now on.
Your Soul Patch Ain’t Got Soul: "

Seriously… why is that little dab of hair called a soul patch anyway? I’ve just finished trying to research this and I can’t find any satifactory etymology of the phrase anywhere. Here’s what I have been able to gather:


So my theory on the history of the soul patch goes like this. It was the height of the 1950s jazz movement. African-American jazz musicians were getting freaky and white counterculture ate it up. They felt so cool and progressive hanging out at the club and grooving on the new sounds that were being made up on the spot. In the midst of that jazz-induced euphoria, these kids noticed their idols wearing this little patch of hair under their bottom lip, not knowing what reason it served. In an effort to be as cool as the cats on the stage, the guys that were caught up in the scene grew out a little patch to match… and the soul patch was introduced to the non-musicians of America.

That still doesn’t explain why it’s called a “soul” patch. Soul music isn’t really an offspring of jazz. Instead, it grew from African-American gospel crossed with rhythm-and-blues (R&B). And while R&B and jazz can both claim the blues as a parent, it’s hard to detect any resemblance between the siblings. An audible connection is even less present between soul music and its uncle jazz. So, there’s just no soul in a soul patch. I’m going to start calling it a “jazz patch.” You should too.

Real soul music was made by guys with real beards. Evidence:

There you have it. There is simply no denying the soulfulness of the full beard. You may think that little spot of hair under your lip gives you soul, but I’m pretty sure that the ladies aren’t feeling it. You want to see a woman feel the effects of a full soul beard? Play “Let’s Get It On” at your next house party. I guarantee that at least one of the girls in attendance will swoon and start turning her mind toward certain things…

It’s not uncommon for me to look at photo of myself and instantly recognize when it was taken because of my facial hair. So too is it true that I see Beatles photos and know what year or recording session it was. The moustachery and bearding of a fellow is as much a clue as their surroundings or the suit they wear.
Thankfully, for folks out there with little bearing on the long-faced Beatles, there is at least this guide.
---

One of my hobbies is personal finance. I read lots of blogs on the topic. Two of those blogs have awesome giveaways. The first is from The Centsible Life – they're giving away $600 of stuff as part of the site’s one year anniversary. You can win all sorts of gift cards, tax preparation software, and any one of about a half dozen books. The giveaway ends January 24th.

The second giveaway is even larger and it’s at Money Crashers. The prize package there is over $7,500 including gift cards, books, software, and even cold hard cash. This giveaway is part of their redesign and relaunch for the new year. This giveaway ends January 31st with winners selected February 3rd.