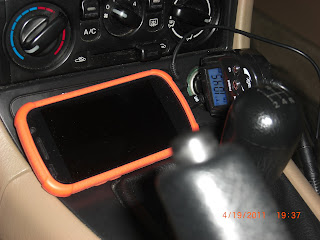 This really isn't a "DIY" project so much as a creative solution to a problem. The Miata's antenna is broken and the car still has the OEM Bose stereo (complete with cassette player) so it doesn't play mp3s or have a hard drive or SD slot. So with no radio all I could do to have tunes in the car is CDs (I don't have a portable cassette carrier). I didn't want to have a large cache of CDs in the car. We've had a satellite radio in the Xterra for years so I've gotten used to commercial free music. Although the previous owner wired for satellite radio I didn't want to buy satellite radio hardware because that limits me to only being able to listen in the car. I also want to be able to listen to it at my new job. So I added the inexpensive online subscription to our existing account which allows for listening online and through a phone app. I bought a FM transmitter/charger for my Google Nexus S Android smartphone. This enables me to listen to satellite radio in my car using my phone. And if I get tired of listening to satellite radio I can listen to my entire music collection via the Amazon cloud player app which enables me to listen to my digital music collection stored in Amazon cloud storage. Now I have access to endless music wherever and whenever I want. See the pics for my car setup. I've found a few drawbacks- 1. there is a digital hiss coming through the speakers that can be heard when the music is soft. It's probably due to no clear FM tuning because the antenna is missing. 2. The low placement of the phone on the center console makes me have to look down if or when I have to make adjustments or using the navigation. I need a dashboard mount like the ones used for GPS units. 3. The location of the plug and the size of the FM transmitter makes shifting into fifth gear a little challenging. I found orienting the transmitter vertically solves the problem (see pics). It also makes seeing the transmitter's display easier for the driver. A clever trick inside the creative solution! Maybe I should rock out old school and bust out my tapes to see how the cassette player sounds.

World Beard and Moustache Championships
Beard Team USA leaves for the World Beard and Moustache Championships in Norway in just one month. We have a very strong squad hoping for a successful defense to America's title as the leading power in international bearding.
You can view BTUSA's starting line-up for the worlds attached to this email.  For my category-by-category analysis of the competition, check out http://www.worldbeardchampionships.com/news/category-by-category-analysis-of-2011-wbmc/. Go USA!
Whisker Wars
BTUSA is about to get even more famous.  Whisker Wars, a docu-series about Beard Team USA by the producers of the Deadliest Catch and other popular shows, is set to premiere on August 5 at 10 pm on IFC.  Set your Tivos and fasten your seat belts. 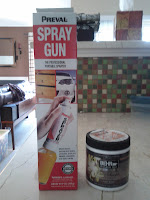 The second part of my ashtray lid DIY project involved the painting of the lid. I went to Home Depot for spray paint. I brought the ashtray into the store with me. There wasn't any really close color matches. One of the associates suggested I get the lid color matched with regular interior house paint and use a small spray gun. See the supplies in the pic to the right. Another great idea not thought of by me! So I bought the spray gun and a Behr paint color sampler that can be customized. Total cost about $8.30. A small investment for a large return.

I had a hard time getting the spray gun to work. It wouldn't spray paint. I had to thin the paint enough to get it to go through the feeder tube. I finally got the gun to spray paint. The color match is dead on but the finish is not. I should have bought a semi-gloss instead of a satin finish paint. The crack is still visible, but I can live with that. Check out the after and before pics below.


The first thing I noticed when I got into Orangina, the orange 2000 Mazda Miata I just bought, for a test drive was that the center console ashtray lid was cracked down the middle. The right side of the lid was gone, seemingly forever. I figured if I bought the car I'd just remove the ashtray all together which would leave a tiny storage bin. Luckily I found the broken lid piece in the glove box. Thank you previous owner! The two pieces fight together perfectly, with no chips or gaps. I just had to figure out a way to fix it. I figured some strong glue would do the trick. I'm not an adhesive expert, so I went to my local home improvement store. I showed one of the clerks what I wanted to do and he suggested plastic epoxy. The stuff worked worked great. Check out the pics. I used mineral spirits to remove the excess glue. Now all I've got to do is bust out the spray paint to make it look like new. Another successful DIY project.

In my post about my new car, Orangina, I listed some items that needed to be fixed or replaced. The tires were the most critical, since that's the only part of the car that actually touches the road. The tires that were on the car when I bought it were old, cracked and worn out. They had been on the car for way too long. Apparently the 2000 Miata has an odd tire size, 195/50/R15, because none of the four tire shops close to my house carried them or could even get them. Michelin makes an all season Exalto in that size, but they were out of stock. The Costco tire clerk suggested TireVan, a local mobile tire store. They come to you. It's a great business model and I couldn't be happier with the service I received. You order the tires and schedule installation from the website. It couldn't be easier. TireVan carried the Michelin's, which were pricey,  but also had a off brand, Maxxis, in the Miata's size which were much cheaper and actually rated better overall than the Michelins. After doing some internet research on Maxxis tires, I found that they are makers of bicycle and ATV tires and are apparently big in the drifting community. Everyone who owned them seemed happy with them. So I went with the cheap no-name brand tires. I can't tell the difference when I'm driving. Tires are tires. 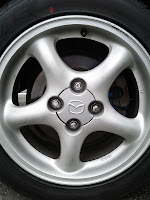 The TireVan installation is a two man job. I was talking to one of them about the ugly, faded tan center caps. I told him I wanted to replace them so that they match the wheels like they did when the car was new. I had priced them on the internet, and they ran about $25-$35 each. He suggested spray painting the caps rather than buying new ones. What a brilliant idea! I wish I had thought of that. I went to Home Depot and bought a can of silver matte finish spray paint for $6. They turned out pretty good if you ask me. Damn near perfect match. See the "after" pic on the right. I forgot to take a "before" picture. If you look closely at this pic of the car taken a few days ago, you'll see the center caps are tan. So for very little money and time, I upgraded the aesthetics of the car. Now that's DIY!

My next DIY project is another item on the car that needs replacing - the antenna. A buddy of mine who is restoring a BMW wagon suggested I go to a junkyard for the antenna instead of buying new. Another great idea. Junkyards can be hit or miss. And there aren't "pull your own part" yards close to me, but there is one in Maryland. It's worth a shot.

Today should have been my three year anniversary of living car free. I say "should have been" because 2011 has been a challenging year for me so far and has brought about a lot of change outside of my control, especially when it comes to my career. I was laid off in January and after a two month search, finally found a new job. I'll get into the details of my lay off, job search, and what I did during my time off in a separate post. This post will focus on my car situation. The new job is not easily accessible by public transportation. When I say "not easily" I mean walking to the bus stop, taking bus #1 to the subway, taking the subway for a number of stops, then taking bus #2 to the job site. All told the commute is three hours round trip. That just won't cut it for me. I need to spend time with my family. So I sucked it up and bought a used car last week. I can drive to the new job in approximately 45 minutes; a little longer in the evenings on my way home. Driving to and from work will shave at least an hour off my commute and I can come and go on my schedule, not public transportation's (always late) schedule.

I bought a car I've wanted since it was new, a 2000 orange Mazda Miata. I named her "Orangina". It's in keeping with the spirit and tradition of having orange roadsters and if I must drive, I want something fun to do it in. It has a manual transmission, which I haven't had in a long time and missed. It's in great shape, has below average miles for an 11 year old car, doesn't leak anything, is fun to drive and the original Bose stereo sounds awesome! All it needs is a new set of tires, a new radio antenna (original one is broken off) and some floor mats. Oh, and new center caps. For some reason the original silver grey OEM caps that matched the wheels have been replaced with ugly tan caps.
While I'm saddened to no longer be car free, at the same time I'm excited to have a car I've had my eye on. In the short term I've shortened my commute to my new job and we'll be back to being a two car family. Long term, we plan on having another kid and moving to Austin, TX in 2012. I don't know if that will necessitate the need to have two cars, but only time will tell.