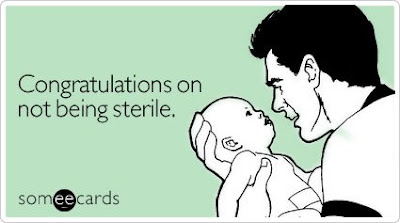 This ecard that Chronic sent me says it all. A little Shock bun is in the oven. We found out today. We've started a new blog, the Shock Family Circus, that will chronicle the bambino's rise from conception to adulthood. Stay tuned.
Posted by groovesocket at 10/29/2008 12:25:00 PM No comments:

There is a gambling strategy called "The Martingale". This doubling game offers something for nothing—certain profits, with no risk. Hence its appeal to gamblers. In a general sense the current economic situation was caused by Wall Street using the Martingale strategy. The carefully synthesized financial instruments now seeping toxically from the hulls of multiple investment banks are vastly more complicated than the Martingale. But they suffer the same fundamental flaw: They claim to create returns out of nothing, with no attendant risk. That's not just suspicious. In many cases, it's mathematically impossible. Read the article for the gritty details. It's fascinating.
Posted by groovesocket at 10/21/2008 02:21:00 PM No comments:

Say Cheese: A Dozen Pics That Should Never Have Been Posted Online

A picture can be worth more than thousand words-a single photo can cost you your reputation, your job, even your freedom-if you post it online. Some words of caution to all you MySpace, Facebook and YouTube devotees - think twice before posting a pic or video online. If you need some convincing, read this article. Metallica said it best, "Sad But True".
Posted by groovesocket at 10/18/2008 05:31:00 PM No comments:

The only way for the general public to get rights to buy Super Bowl tickets directly from the NFL at face value is through the annual random drawing. You have to send a self addressed postcard registered or certified mail to the NFL. A few months later you'll get a postcard back telling you whether your name was picked. I've never been randomly chosen. As I discussed in my previous football blog post, the number of credit card points needed to get a pair of Super Bowl tickets has risen to 300k. My only route to attend the Super Bowl looks to be buying them from resellers on the internet. I'm going to have to get a second job.

We are up to 5 centimeters and counting! Atom decided to play with the mustache wax the other night, so we decided to go ahead and do a progress picture. The fuzzy chin is coming along nicely. This has been growing since his sister's wedding in June. Personally...I think he should wax that sucker every day!